We send this sad note regarding a wonderful alumni parent José Arce-Yee. José helped the school come into being 30 years ago as we were just starting.  He had a knack for helping non-profit start-ups and began many important programs in the Fruitvale area  of Oakland. It was our good luck to have José and Melba’s boys enrolled in BlueSkies, then AOCS, just as the school was beginning.  José joined our board and helped create the school’s first business plan, and his contribution set in place the sustainability of the agency and was just what we needed at just the right time.  In his humanitarian way, he helped us learn how to be a sustainable business and a service.  He set a high bar and was a simply  wonderful human being.  In his work with BlueSkies in the 1980’s, he brought a structural understanding of business and his thoughtful kindness which made a difference in many, many lives, including the lives of you at the school today.

Below you will an excerpt from his service describing his life well lived.  If any of you would like to send a note to his wife Melba Yee feel free to drop them or send them to me at Claireb@blueSkies4children.org and I’ll see that she gets them. 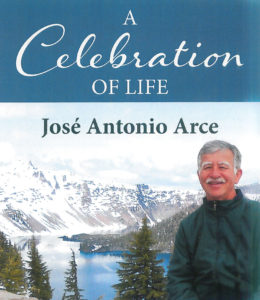 José Antonio Arce was born in Chihuahua, Mexico on August 22, 1948.  He moved with his family to the United States at age five and fulfilled his parents’ dreams of attaining an education and honoring family.  José grew up in Colusa, California where he was industrious from a young age, serving as both an altar boy and the town’s paperboy.  Eager to make an impact on the world, he left Colusa at age 17 and graduated from Berkeley High School a year later.

The anti-war and civil rights movements greatly influenced José.  He moved to New York City and joined the Catholic Worker movement where he met Dorothy Day and worked at the soup kitchen clothing and feeding the needy.  Grounded in his convictions, José became a Conscientious Objector to the War in Vietnam.  His FBI case officer subsequently assigned him “the worst job in the worst place in the worst city” as an orderly in the emergency surgery section at the Los Angeles County General Hospital.  After completing his service, he earned a Master of Architecture degree from UC Berkeley.  At Cal he was co-founder of the Chicano Architecture Students Association and coordinator of the Chicano Library, developing what became know as the Chicano Classification System.

Over a 28-year career at Citibank, José shaped the  bank’s community development initiatives and rose to Director of Finance and Operations.  Prior to that, he served as planning director at the Spanish Speaking Unity council and co-founded a community planning and architecture firm and the Fruitvale Credit Union.  José’s professional passion was mentoring; he opened doors to numerous young people seeking careers in finance and community development.

José’s volunteer and civic experience was extensive.  he dedicated many hours to numerous community organizations including as Chair of the Oakland Planning Commisssion; board chair of the Earned Assets Resource Network (EARN); founding board member and treasurer of Vital Healthcare Capital (V-Cap); and board chair of the Marcus Foster Educational Insitute; and Commissioner of the Bay Oaks Soccer Club.

In retirement, José traveled with his beloved wife through Easter and Western Europe, across the American Southwest and to South America.  At home, he personally completed major renovation projects, including a new kitchen, a full bathroom and beautiful wine cellar.  Over several years, he extensively researched his wife’s and his families genealogies – work that his family greatly treasures.

José’s life was well lived, with a focus on family and making a positive impact on others.  He is survived by his wife Melba, children Laura, Gabriel, and Daniel, grandchildren Olivia, Nicolas, and Alexandra, son-in-law Chris, daughter-in-law Christine, and siblings Carlos, Luis, and Maria del Pilar.  José was predeceased by his parents, Francisco and Consuelo.

Perhaps they are not stars in the sky, but rather openings where our loved one shines down to let us know they are happy.