BlueSkies for Children has, from its inception, considered its mission to have three parts:

The quality of a child’s experience in an early childhood setting depends entirely on the ability of the teacher to provide age-appropriate experiences within the context of an authentic, caring, and compassionate relationship. BlueSkies can influence the quality of care for hundreds of young children by supporting teachers who work in many early childhood settings, while it can only serve about one hundred children per year directly on its site. This is why the third piece of the mission has always been teacher education programs through a variety of different delivery systems.

The Process, Not the Product

The teacher sets out different colors of paint in several low dishes, then puts out a dish of rolling tools: a plastic pizza cutter, a small wheel off a plastic car, a small plastic paint roller, a large marble. Today the children can experiment with moving paint onto...
Read More

Stampede in the Nursery School

With a shriek of joy, five bundled-up children take off at a full run around the climber and back to the fence. It is a chilly day and most of the children are playing inside, so there is plenty of room to run without disrupting other children. The teacher watches the...
Read More

Dear BlueSkies Families, We send this sad note regarding a wonderful alumni parent José Arce-Yee. José helped the school come into being 30 years ago as we were just starting.  He had a knack for helping non-profit start-ups and began many important programs in the...
Read More

Snapshot on a Rainy Day

Preschool teachers value “open-ended toys” like blocks and art materials because the children can use them to support whatever play they have in mind. This snapshot shows, however, that they can also often re-purpose specific equipment if the teacher will give them...
Read More

For Parents and Educators

One of the great pleasures of parenthood is sharing our holiday traditions with the next generation… but working parents today need to start with a dose of reality.  Perhaps our own memories of those traditions came out of a very different family structure, or from...
Read More

How to Give Meaningful Gifts to Young Children

As we approach the holidays, buying gifts for young children often becomes part of the fun of the season. This article offers information about how and why children play, and what equipment facilitates the creative play process for children at different ages. Through...
Read More

Daycare, a Refuge in the Holidays

Parents and teachers are eager to share cultural traditions with children – sometimes so eager that children end up with lots of disassociated ideas floating in their heads which they try hard to assimilate into their construct of the world. I fondly remember a...
Read More

Snapshot in the Playroom – Learning how to move

Janelle is 6 months old, doing just what a baby her age should be doing—pushing up, kicking, not quite mobile yet but definitely getting the idea. Today she is lying near a low round basket with a few balls in it; as she haphazardly bumps it with one hand it rocks and...
Read More

For over 30 years, Claire Bainer and Liisa Hale have been contributing to the early childhood education community.  Browse the repository of BlueSkies publications, as well as other recommended readings currated by the staff. 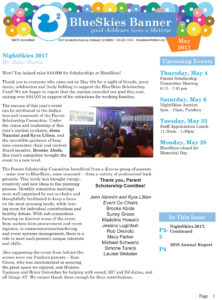 For over twenty years, BlueSkies has been producing a monthly newsletter, the BlueSkies Banner filled with helpful tips and insights about young children.

Review articles about working with children and art in the classroom.  In this section, you’ll find information related to art philosophy, art development, materials and procedures. 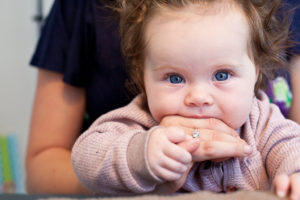 An in-depth exploration of the developmental reasons behind biting, and some strategies for working with children who bite 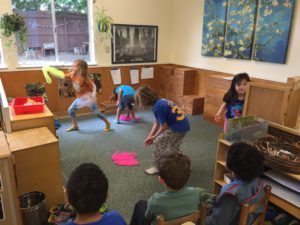 A good teacher is a good problem-solver.  An Early Care and Education classroom bubbles with human growth and emotion … and sometimes it bubbles over!  To orchestrate a smoothly running classroom, the teacher anticipates rough spots with preventive strategies and can step back (in her mind, if not physically) from the heat of the moment to note challenging times in the day for later consideration.

In 1987 new licensing regulations required classes in Infant Toddler Development for teachers of children under 3, but few such classes existed.  BlueSkies (then known as Association of Children’s Services, or AOCS) received grants from the Clorox and Irvine foundations to create and teach Infant Toddler Care and Development classes on site. From 1987-2002 the Neighborhood Accreditation Center (NAC) allowed more than 3,000 center teachers and home providers to complete all their required classes for teacher licensing from the state, with accreditation through California State University of the East Bay Extended Education. Entry level classes were also taught in partnership with the City of Oakland Senior Asset program, certifying older citizens to start a new career in child care.

Subsequent adult education has been offered through programs such as the Working With Play series, as funding permits. In this program, the entire teaching and program staff of eight child care centers attended full day workshops at BlueSkies to learn more about teaching through the children’s play. During the following 3 months, the centers received on-site coaching from a mentor teacher who helped them arrange their classrooms and yards, and teach the routines, that would allow the children to be more self-directed in their play.